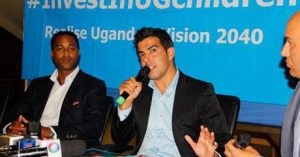 In August 2015 our CEO Rayco Garcia was named UNICEF Ambassador. On the picture, our CEO alongside with Patrick Kluivert and Jaya Murphy, head of communications of UNICEF in Africa.

The number of children dying before their fifth birthday has been reduced globally by more than half since 2000, according to the latest figures from Unicef.
In 1990, 12.7 million under-five were dying annually while, today, that figure has dropped to 5.9 million, meaning that 6.8 million children who would have died every year, are now surviving beyond age of five.

Almost all of the deaths under-five are preventable; half of the deaths are due to malnutrition or related complications, while other leading causes include complications during birth, pneumonia, diarrhoea, sepsis and malaria.
During a press conference that took place in Kampala (Uganda), Jaya Murphy, head of communications of UNICEF named Mr Rayco García and Patrick Kluivert Unicef Sport Ambassadors with the aim of helping to raise awareness of the rest of the world about real problems, currently faced by children and young people in Africa, using sport as platform to find solutions.