In the picture, our CEO Mr Rayco García with the Major of Miami Dade, Carlos Giménez.

In a country like United States, sport is a fundamental tool of union and balance among its inhabitants. The city of Miami has one of the highest immigration rates in the country. Providing opportunities for training and leisure, using sport as a platform, is one of the goals of Miami Dade Mayor, Carlos Giménez, who spoke with our CEO, Mr Rayco Garcia, different possibilities of collaboration.
Technical advice to soccer academies, creation of amateur leagues and tournaments for users of different ages and levels and training talks that instill the positive values of the sport to the youngsters were some of the objectives discussed. 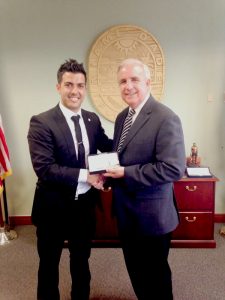