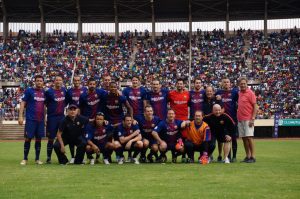 H.E President Robert Mugabe who is one of Africa’s founding fathers, the worlds longest serving statesman and a huge fan of F.C Barcelona invited our CEO Mr. Rayco Garcia to work on the Mugabe Legacy Match with the assistance of RG Consultant and Sport Solutions Africa Representative Mr. Tichaona Mawoni. The match was done to help unite a divided nation.

The stadium was full to capacity as more than 60,000 tickets were sold and the crowd had a once in a lifetime opportunity to watch former World Player of the Year  Rivaldo, Dutch legend Patrick Kluivert and the FC Barcelona Legends play in Zimbabwe for the first time.

The match ended in a 2 all draw reflective of the nations emotions of unity and peace. After this match Zimbabwe was ranked number one of the most safe and secure destination in a 2017 global survey.